You have a question about Tesla, then Reddit has an answer. In this article, we will talk about Best and Cheapest Tesla Insurance Reddit users upvoted the most in 2022.

The prices and collective data for Tesla Insurance are based on the years 2019 to 2022. However, pricing is subject to fluctuate due to a variety of variables.

According to a Reddit user u/dgcaste, it is the best and Cheap Tesla Insurance available in California by the time. He says,

“When I went to purchase my P3D three months ago I got quotes from several different insurance agencies. USAA wanted $240 a month and Geico was about $200. Since I had nothing to lose, I rolled with Tesla’s insurance (only available in CA for now…more on that in a second) and got a quote for $113! I have great coverage on my insurance. That is probably the least I’ve ever paid for a car, and my next most expensive car was half the price of this one. My driving history is pretty clean right now but I’ve had several collisions claims over the last 5-6 years and I have gotten pulled over for speeding probably 7-8 times in that span. Just nothing in the last 2 years or so.”

He has stated several points that make Tesla Insurance the best and lowest of all:-

Well, that’s not all, recently a Reddit user shared his Tesla Insurance experience…

Why should I opt for Tesla Insurance?

For Tesla vehicles, some insurers impose a comparatively high premium. One factor is that there is still a dearth of historical data regarding the price of electric car repairs. By vertically integrating insurance into its offering, Tesla brings down the price of owning its products.

State Farm is the second most popular Tesla Car Insurance provider among Reddit users. People who are dissatisfied with the Tesla Insurance quote or find it to be significantly higher are more likely to choose State Farm. State Farm Insurance is less expensive than Tesla Insurance.

A Reddit username ‘reefine’ who has been voted up 521 times says, ‘He Has State Farm Insurance currently for his Tesla Car’

He also mentioned that ‘He also got a free Glass replacement with State Farm’. A Tesla Windshield is an expensive deal to replace it and can cost you over $1000 easily.

Insurance Comparison for Drivers Who Caused an Accident with Injury

The third one on our list is Geico, which is a personal favorite of Reddit users when it comes to Tesla. A Reddit username asethskyr says Results vary wildly.

“Liberty Mutual’s quote was five times Geico’s quotes for me. I had been with them for around twelve years, so I asked them for a more competitive quote, and it dropped down to four times. Other people have gotten reasonable quotes from them.

I think part of it was that the Tesla Model 3 wasn’t in their preset dropdown, so they rated it like a luxury sports car or something”

In a comparison of the Largest Auto Insurers, Tesla gave the cheapest auto insurance cost in Texas, 48% less than the average car insurance companies. Meanwhile, State Farm was the second-most affordable alternative. 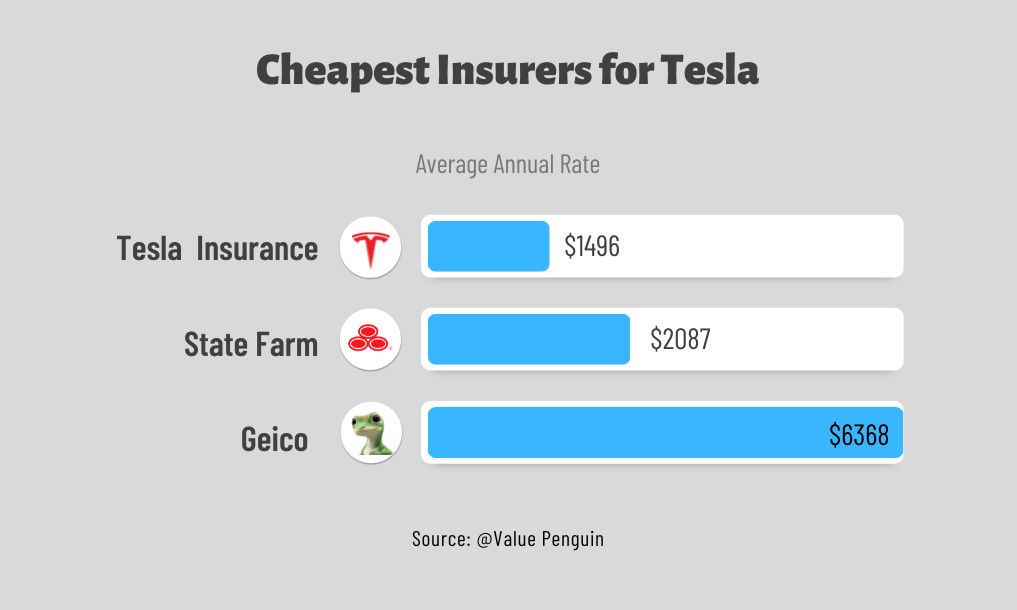 Remember, an Insurance quote depends on your age, previous record, city and state. Insurance is a rather complex game, and so you can get anywhere from $40/month to $300/month for the exact same coverage from multiple companies, or it can go even higher.

Why is Tesla insurance so high?

The cost of car insurance specially Tesla cars is high due to the price of buying and repairing them. Teslas’ high repair costs and maintenance costs make collision coverage more expensive compared to other luxury vehicles or electric vehicles.

A Tesla does not have many aftermarket parts available. The parts can only be ordered from Tesla, so most regular parts stores cannot even order them. They can only be obtained directly from Tesla. In addition, no one outside of Tesla knows how to repair them.

What is the best insurance for Tesla Model Y?

The Model Y is the most affordable Tesla to insure, with an average annual cost of $3,057 for the base model. It is even less expensive than the Tesla Model 3.

What is the best insurance for Tesla Model 3?

The Model 3 sedan is the least priced Tesla model to purchase, but insurance costs are still relatively high at $3,386 per year for the newest basic model.